Hydrophobins are morphogenetic, small secreted hydrophobic fungal proteins produced in response to changing development and environmental conditions. These proteins are important in the interaction between certain fungi and their hosts. In mutualistic ectomycorrhizal fungi several hydrophobins form a subclass of mycorrhizal-induced small secreted proteins that are likely to be critical in the formation of the symbiotic interface with host root cells. In this study, two genomes of the ectomycorrhizal basidiomycete Laccaria bicolor strains S238N-H82 (from North America) and 81306 (from Europe) were surveyed to construct a comprehensive genome-wide inventory of hydrophobins and to explore their characteristics and roles during host colonization. The S238N-H82 L. bicolor hydrophobin gene family is composed of 12 genes while the 81306 strain encodes nine hydrophobins, all corresponding to class I hydrophobins. The three extra hydrophobin genes encoded by the S238N-H82 genome likely arose via gene duplication and are bordered by transposon rich regions. Expression profiles of the hydrophobin genes of L. bicolor varied greatly depending on life stage (e.g. free living mycelium vs. root colonization) and on the host root environment. We conclude from this study that the complex diversity and range of expression profiles of the Laccaria hydrophobin multi-gene family have likely been a selective advantage for this mutualist in colonizing a wide range of host plants. 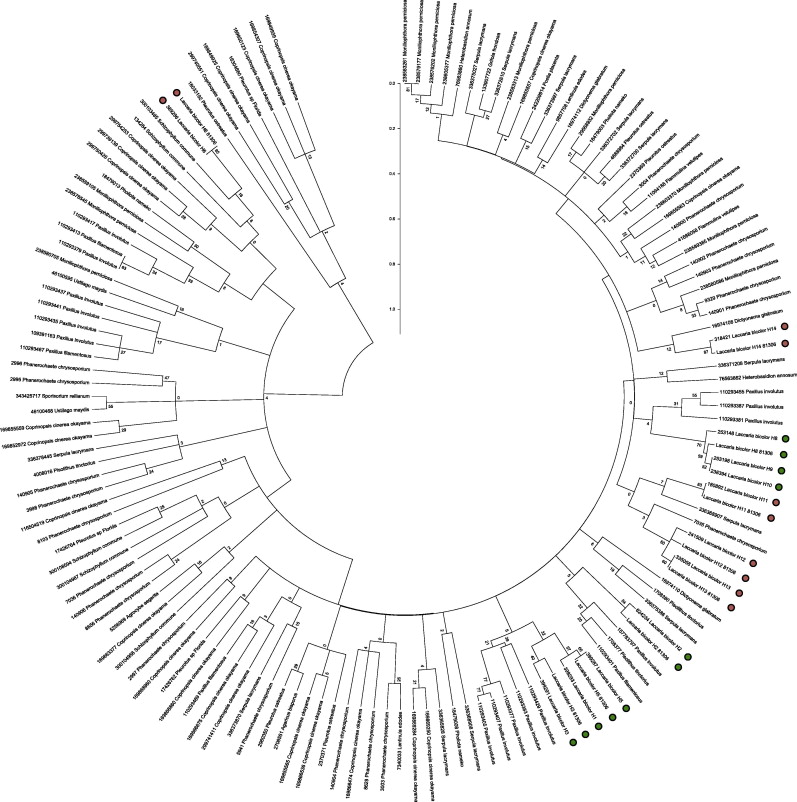 Phylogenetic relationship of L. bicolor hydrophobins to other basidiomycete hydrophobins. The evolutionary history was inferred by using the Maximum Likelihood method based on the JTT matrix-based model (Jones et al., 1992). The bootstrap consensus tree inferred from 500 replicates (Felsenstein, 1985) is taken to represent the evolutionary history of the taxa analyzed (  and ). Branches corresponding to partitions reproduced in less than 50% bootstrap replicates are collapsed. Initial tree(s) for the heuristic search were obtained automatically as follows. When the number of common sites was <100 or less than one fourth of the total number of sites, the maximum parsimony method was used; otherwise BIONJ method with MCL distance matrix was used. The analysis involved 143 amino acid sequences. All positions containing gaps and missing data were eliminated. There were a total of 12 positions in the final dataset. Evolutionary analyzes were conducted in MEGA5 (  and ). Each hydrophobin is identified by a GI number (with the exception of L. bicolor and P. chrysosporium which are identified by JGI protein ID’s) and by the organism from which they were sequenced. LbH genes that group with saprotrophic fungal hydrophobins are marked by brown dots and LbH genes that group with mutualistic fungal hydrophobins are marked with green dots.